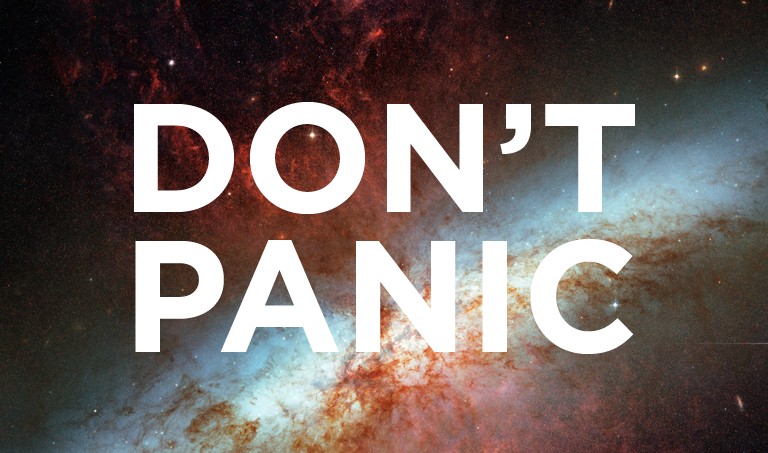 I wrote something about this a little while back, but then completely neglected to share it when I dove down into a deep dark feelings pit. Things often get forgotten in the feelings pit, like the shape of a smile or the sound of genuine laughter. I feel like I’m already getting off track.

Last year, I read a staggeringly small amount of actual prose books. I think the number topped out at around… three and a half, which is terrible. In that time, I know I bought more than three and a half prose books, which becomes problematic when you’re trying to live a fairly minimalistic life.

So, at the start of the year, I came up with several goals, some of which apply here. One was to read more books. Another was to buy less. A third was to look at our already populate shelves when the mood to read prose strikes, which would in turn help with that second goal. These goals ended up colliding with the feelings pit, and a very specific project came about: The Douglas Adams Project.

The idea is simple: over the course of 2016, I’ll be working my way through the works of Douglas Adams, starting with The Hitchhiker’s Guide to the Galaxy series, and rolling straight into Dirk Gently. If some time remains on the clock after those seven, I’m going to extend the exercise into the sixth Hitchhiker’s book, The Salmon of Doubt, and the novelization of Adams’ unproduced Doctor Who script Shana. I will likely read these books regardless of whether or not I get to them in 2016, but I enjoy the idea of having stretch goals for this challenge. But anyway.

I chose Douglas Adams because when I was starting to fall into the feelings pit at the beginning of the year, my brain started pumping out fond memories of reading The Hitchhiker’s Guide, and that coupled with the thought that I had owned the complete set for ages, but had never gotten around to reading the rest. Reading them all would serve several purposes, and hopefully pull myself out of the doldrums.

At this point in the project, I’ve just wrapped Hitchhiker’s once more, and the experience was as pleasurable as I remember it being the first time around. There’s a small chance that I got a bit more out of it now that I’m a bit older and wiser and can pull out more wonderful story structure things from it, but that’s a post for another day. (Next week, in fact.)

So yes. There it is. A task for 2016, already on its way to completion. I suspect there will be several road blocks to come, including breaks to read other things that tickle my fancy, combined with the general fact that I rarely see projects like this through to the end. Which is actually another goal for 2016: try and actually get things done. I’ll let you know how that goes as well.

Tags: Douglas Adams, The Hitchhiker's Guide to the Galaxy