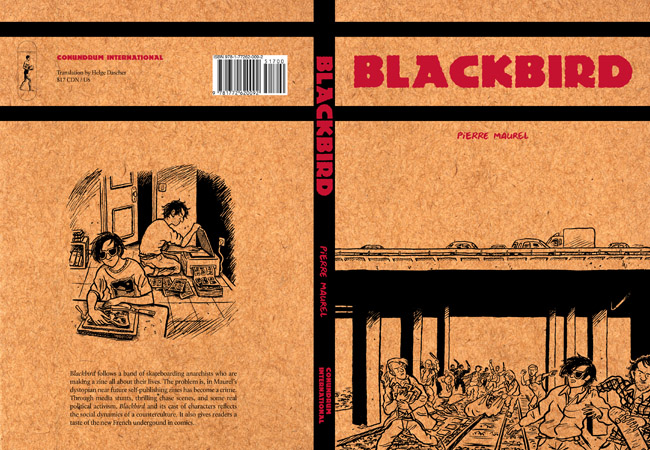 Synopsis: When self-publishing becomes outlawed, a comics zine group attempts to be heard when the entire world is closing in on them.

01. Semantics to kick things off: what follows is a recommendation and not a review. There’s no critique involved here, only emotion. Honestly, I think there would be a lot less drama within the comics industry right now if folks didn’t blanket term opinion pieces with the word “review”. This has nothing to do with the book I’ll be talking with you about shortly.

Or well… almost nothing.

02. Right now I live many of my days with a weight in my gut. A bit of it is a longing for when things were a bit simpler. Most of it is the knowledge that things were never “better” so much as I was sheltered from a lot of the bad, or just didn’t care.

While I was reading Blackbird, I felt as though I was reading a manifestation of what lives in my gut. The story itself if pretty straight forward. A small group of creators puts together a comic zine called “Blackbird” and distributes it around town. Over the course of the story, a law is passed banning self-publication in all forms but advertisement, so that certain assurances can be made about content. Understandably, this doesn’t go well.

03. Over the course of the story, the zine creators are alternatively courageous and fearful. They have something they want to say, in a format that speaks to them, and they are being told that they can no longer do so without bigger consequences. The act of creation has become a risk, and speaking up, even worse. But they don’t stop. They never stop.

When I feel around for the weight that lives in my stomach, I linger on the things that placed it there – my own courage and fear. My own push for creativity and voice and the forces against it. I feel… I feel my privilege, and the fact that – much like one of the characters in the story – I am readily afforded a voice and a platform. I feel the weight of all who don’t, and I see that in a lot of ways, this story is about them. All the means to produce, with a world telling you that your voice isn’t worth as much as the person next to you who just happens to be a cis-het white male.

04. I don’t want to deal with the weight that I feel. But then again, nobody really does. Am I the person to really sit here and say that the world isn’t fair, and that things need to change? Am I the person to read Blackbird and say to you “this world of artistic and aesthetic oppression speaks to me”? Probably not. But regardless, this is a book that I found something recognizable in – something that I want to push desperately against. I can only imagine how it would read for others.

05. As it turns out, the contents of this graphic novel were originally serialized by Pierre Maurel in the zine format. There’s definitely quite a few layers of meta-commentary that could be pealed back within the contents and the difference between the original means of production and this finished product. We should all be so lucky to build with our hands, and have our voiced be heard.