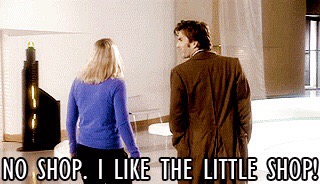 When I think about all the money I needlessly spent in my 20s, I get a little sad. I realize now that I could have have paid off my debt by now if I had been more serious about paying it back when I was making more income. I often want to go back to my 20-something year old self and tell her to be more cautious with her money. But then I think, would I have gone to school, would I have moved to Vancouver(and returned to Edmonton less than a year later, broke and alone), would I have made similar enough choices to end up meeting Brandon? Then I get really sad there’s another me out there that didn’t end up with an amazing husband, two beautiful cats, and a business we can both be proud of. Or maybe she(I?) did, and they have six cats and have two separate jobs that aren’t anything alike, but they are still happy. Good luck, Earth 2 Danica. Hope you don’t have to worry about lizard overlords.

I have a lot of regrets in my life. Some of them are decades old, some are less than a year. I try my darnedest not to regret anything, but I am not strong enough for that. It’s almost ironic I didn’t get serious about paying off my debt until I could barely afford to.

When I think about my future, it still somehow seems attainable, even with my current financial status. I don’t have large dreams for retirement. I’ve always wanted a small life, and that won’t change when I don’t have to work anymore. I hope that I’m in a position to choose when I retire, that I have some control over my future in the future. I don’t feel that currently, and that scares me. My goal for this year is to get some of that feeling back. I will pay off my student loans, pay off my credit card should I be bringing in enough income, hopefully take a small vacation, get back to being more comfortable financially by having a little bit left over after bills each month, start building my savings again. I don’t think these are far flung goals. I feel they’re attainable, and I’m going to try my hardest to focus on the long term instead of This Exact Moment, which is what my depression wants me to focus on.

« My Shopping Ban: Making Sacrifices Doctor Whooch // Episode 086 // We Like Your Stupid Faces »